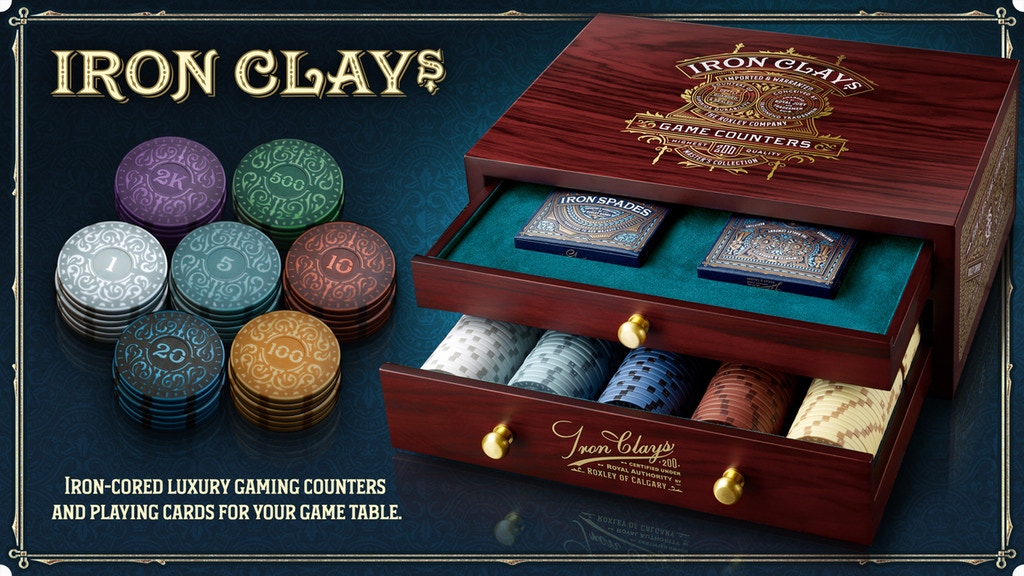 Latest Updates from Our Project:

Adam Smith from Rolling Solo gives us another closeup look at the 400 Wooden Chest and the 100 Printed Box! This was filmed directly under bright studio lights, so you can see more of the rich brown tint and texture of the Charred Oak veneer than is obvious in many photos so far. (As Adam says, this is still an advance manufacturer's copy; the final will have designs on all sides and improved ink tinting.) (The 100 Printed Box is 100% final).

This campaign will end on Thu, June 20th, at 10 PM Mountain Time (In EST that's midnight; in GMT it's 4AM Friday morning.) If you are still undecided (or confused) as to what pledge level or add-ons you need, don't panic; we're making every effort to answer your messages in a timely fashion, but you can guarantee your options stay open in the pledge manager by pledging at least $19 Canadian for the Add-Ons & Upgrades level.

Thank You For Everything So Far!

This has been an amazing campaign--over 600% funded, over 4000 backers, over half a million Canadian dollars raised, and we're not finished yet! We're incredibly grateful--not just for how you have made the Iron Clays & Iron Spades possible; but for how your interaction and feedback have made them better, for how you've helped each other out in the comments, and for all of the shares and ratings you've given us.

Team Roxley are humbled and blessed by your support and trust, and it's already inspiring us for what comes next: setting up the pledge manager, finalizing shipping arrangements, and reaching out to local stores that signed up for retailer pledges (and maybe even getting some sleep, if we're lucky!).

We'll update you once more before we reach the finish line. Until then, we hope you had a wonderful Father's Day weekend!

From the time we conceived of the idea during the Brass campaign, we wanted to make Iron Clays because we actually wanted to use them ourselves.  As a heavy gamer, we adore the usability of poker chips.  What we never did love though was that they all sort of looked the same: like standard poker chips.  I wanted something that felt unique, and could be used in a multitude of games without them feeling out of place.

Since then, we've discovered that others also share this desire... and now you've shown us that desire as well.

We are floored by how quickly this funded and we cannot thank you enough for your support.

We'll have some incredible cardists and photographers showing off the Iron Spades (& Clays) over the course of the campaign, so we will be sharing those with you in our updates.

Are you a cardist or magician wanting to show off your skills using Iron Clays & Spades?

Our next update will be Wednesday, and in the meantime you can catch us in the comments, DM’s, on BGG, Facebook, Instagram, and Twitter! (Please allow a reasonable amount of time for a response, given the high volume of messaging we're getting right now.)

Thanks to eagle-eyed feedback from the backer community, some corrections and improvements have been made to the unofficial Upgrade Path calculator. If you used this to estimate your pledge before yesterday morning (Thursday, June 13), you can double check your numbers here to see if a more accurate estimate is available:

If your pledge amount is inaccurate due to a calculation error, this is not an emergency. Your final selections, chip amounts, and costs will all be calculated and confirmed in the pledge manager; we can help you with any problems you have then. Again, we love Michel's work (and his responsiveness to feedback!) but still recommend that this app should be used only as an estimator.

Q. What did the origami artist say when he had a bad hand?

A. Nothing - he just folded.

Team Roxley are all fathers, and we've got the dad jokes to prove it, but we can be notoriously hard to buy gifts for. Do you have a father figure you'd like to honor, who's just as challenging? Some Iron Spades and/or Iron Clays added to your pledge on their behalf could be the solution. (Or you could just go with a tie. Dads love those, right?)

We’ll be back early next week with the next update. Have a wonderful weekend!


If you’re a fan of Watch It Played (or if you learned Brass: Birmingham from our official rules video), you'll recognize this smiling face!  The legendary Rodney Smith has returned, with a closer look at the black 400 Wooden Chest! In this video, he demonstrates the strength of the magnetic seal on the chest drawers, and takes out the removable trays to give you a better look at the details, including the the faux suede lining on the underside for the protection of your game table surface. (Note--as Rodney says, this is just an advanced manufacturer’s copy of the box; the final will have a number of small tweaks and improvements, including designs printed on the sides that are currently blank.)

We knew backers were going to analyze the options we gave them in depth... but we didn’t anticipate backer Michel Billard coding his own PROGRAM to do it! Michel has reposted this for others to use, to estimate their costs, how many chips they'll receive, and how many will be left over afterwards.

(This data is based on the most recent Upgrade Paths chart)

NOTE: While we are extremely impressed with Michel’s work, we must officially disclaim that this program was not created by Roxley, and our staff have not had the time to verify all of the numbers and calculations in it. We recommend that if you use this app, you use it only to estimate pricing and quantities. Your final totals will be confirmed with you in the pledge manager after the campaign.

Brass: Birmingham has been nominated for an Origins award! We’re sad that we won’t be at Origins to celebrate, but Brass, and the Iron Clays will! Attendees can examine & play the nominated games in the Origins Awards Area at Hall B 1166, and register your votes for Fan Favorite. Additionally, we hear Parallel Games will be featuring the Iron Clays 100 along with their game City of the Big Shoulders in the Tabletop Game Cafe booth (#358).

If you don’t yet own Brass and would like to, the Preorder shop for the Kickstarter Deluxe version is still open! Brass: Lancashire is in stock in most areas and ships within a few business days; orders that include Brass: Birmingham will ship in August/September.

Team Roxley are incredibly grateful to all of you who have rated Brass: Birmingham and our other games on BoardGameGeek... did you know there's a category there for game accessories? So if you own a set, or have had the chance to play with them, we'd love to have your honest rating of the Iron Clays too!

Want to show off your skills (cardistry, magic, videography, or photography) using Iron Clays & Spades? We'd love to feature you in our updates! Send us a DM!

We’ll be back on Thursday with the next update. Until then, enjoy your week!!

TL;DR: Just a quick update today from Team Roxley, to feature some fun new content we've been tagged in over the weekend. Next update will be Tuesday, June 11th.

Letterpress is very time consuming to set up, so our partners at Clove St Press have printed tuckboxes for the campaign already, to guarantee it won't delay the project.  And they look amazing!  Here's a video of them hot off the press:

More from the Tantrum House of Magic!

Want to show off your skills using Iron Clays & Spades? We'd love to feature you in our updates! Tag us on social media, or send us a DM!

Thank you for being such an amazing community! We appreciate you being here with us, and here for each other as well. Our next update will be Tuesday, June 11th. Enjoy your Sunday!!